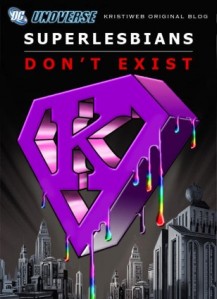 … better yet let me say that I’m not one.

I guess this post all started when I was approached by a girl on twitter who proclaimed she was a “Goldstar”. Now seeing that the last time I was concerned with stars of any metallic color was in grade school I was a bit confused.  I am glad she couldn’t see my face because she definitely was the recipient of my patented “Did you ride the slow bus?” sideeye.

So when she asked me if I was a goldstar… I didn’t even pretend to know what she was talking about.

“What the hell are you talking about? Is that one of those new rap things?” (Yes I said rap “things”… I describe myself in a lot of terms but hip isn’t one.)

She went on to tell me that a goldstar was a lesbian who had never been with a man.

*shrugs* Oh ok… well then no my star is more of a copper… slightly brass color.

Whaaaat… hell I was almost married…. to a man.

Now for all of you “lezzier-than-thou” superlesbians that believe that I am no longer a viable voice in the lgbt community…. see that x in the corner of your screen (or the red button if you have a Mac), click it if that moves you or stay and read a little more… totally up to you.

For those who are still with me I am going to share a little insight for all of you who roll your eyes at divorced lesbians, and stick up your noses at studs with kids. After I’m done we might need to start passing out platinum stars, because these ladies have earned a little more than a brass ring.

To say being a lesbian was not as  “cool” 10 years ago is an understatement. Nowadays girls kissing in the club is the OVERDONE norm. Today teachers say something homophobic, they end up on CNN. A girl wants to wear a tux to prom, she ends up on Ellen. That is not how it was “back in the day”.

We didn’t have lesbian celebrities to identify with, and for many of our parents (or maybe just my bible-toting, collard green cooking ones) homosexual equals Sodom and Gomorrah. What parent wants their child to be a pillar of salt?

So for many of us the bible verse about it being better to “marry than to burn” had a very strong meaning. It really meant marry men or burn the bridges with your family…. your friends… your community. And oftentimes the strain of family pressure and cultural constraints were too much to bear. So these women sacrificed and suffered alone without the cast of the L word… or Noah’s Arc… or even a weekly podcast.

For many of these women the decision to fully embrace the lesbian lifestyle cost them much more than any of us could realize. And now that they have, do you think they’ve reached the promise land?

They not only fight against the labels placed on them by the mainstream world, but the scorn of the homosexual one… all in order to receive the love they deserve. Hmm that does seem a little superpowered now that I think of it.

6 thoughts on “Superlesbians Do Not Exist”