So it is the month of love and Ebony has decided to include a “lesbian” (a term that I think should be replaced with “something-like-a-lesbian”) couple in their Hot Couples in 2011 article. Now at first when my girl RL told me about the article I was like “Go head Ebony” with a big smile… but trust me that smile turned into a side-eye as I read exactly what was going as a “lesbian hot couple” nowadays.

Meet Yanette and Willa. Yanette is an openly gay black woman. She’s loved women since childhood and fought against the oppression of her family to share that love. *nod*
And then there is Willa, who not only doesn’t identify herself as a lesbian but doesn’t even think she would be with a woman had it not been for her current girlfriend. *raised eyebrow*

In the article Willa goes on to share stories of abuse and deceit that landed her into the arms of Yanette. Then she tells us that she went back to men for a year, but now she is back to #TeamP*ssy. And how does she feel about all this you ask? She says “she has the best of both worlds”…*blink*

This article is a trip… still perpetrating the stereotype that women become lesbians when they are tired of being messed over by men…. #fail

Lesbians are just immature and insecure women looking for the “best of both worlds” ….fail…fail…fail to 10th power.

I know good and damn well Ebony could have found a better representation than that (probably in their own offices as that).

Thoughts? Hit me up @kristiweb 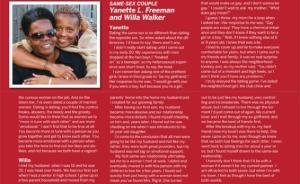 One thought on “:60 Second Shorts: Ebony mag features a “lesbian” couple on their Hot Couples list”