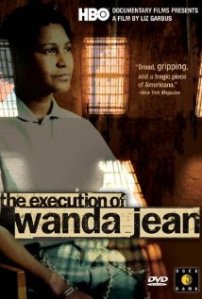 I am sitting here extremely overwhelmed right now after watching the documentary  “The Execution of Wanda Jean”. For those who have never heard or seen it, this is a real life look at how race, sexuality, and mental health are still playing a role in the American justice system . We are introduced to Wanda Jean Allen, an African-American lesbian whose low IQ bordered retardation, who was on death row for murdering her live-in partner Gloria Leathers.

I am so conflicted about this film… this case… this woman… that I am almost at a loss for words. She shot and killed her partner who was leaving her. She had shot and killed another woman who tried to leave before. My black and white mind is telling me that she should die. But once you see the story unfold  you feel your emotions go on a roller coaster ride that still shakes you up well after it is over.

Even though I watched the film already knowing that she was executed 10 years ago, I couldn’t help but have a perverted sense of faith that she would survive. A pit in my stomach began growing when I reminded myself that she wouldn’t.

I think that the tears that flowed as the movie went on were not only for her, but a result of my  inner conflict as to why this was making me cry. Why am I not crying for Gloria? Why am I not crying for Dedra (the woman she pistol whipped and killed 7 years earlier)? I would love to say that it is the excellent work of the documentarian but I’m afraid that might be too easy.

This case brought up questions that I am not sure I even want to ask myself about my community. Except for Jesse Jackson (who had a brief cameo in the documentary), where were the so-called black leaders who are supposed to be the watch guards of injustice? Why had I never heard about this until it was over? Did her being a lesbian make her less of a cause to be heralded? Was that something that Allen herself even knew?

The Reverend Robin Meyers, who served as a spiritual adviser to Allen, is quoted as saying, “I always suspected that Wanda’s renunciation of lesbianism had more to do with helping to revamp herself in the most palatable way for her clemency and appeal processes. She knew perfectly well that her being a lesbian was a big strike against her and that it’s an embarrassment in the black community. She was going to play the best hand that she could play at the very end.” (Source: Wikipedia )

In a social media driven world, would she have even meritted a hash tag? Would she have had online petitions signed? Would they have sold her shirts?

Or is this simply a case of a two time murderer that got her just desserts? Am I the one that is seeing things through cracked lenses because she is African-American and because she is a lesbian. I just don’t know. Unfortunately this is the kind of case that will not ever answer these questions, merely pose them.

Add it to your Netflix Queue