secondary title: “Why I am afraid to see Pariah”

Ok I have been trying to think about how to say this delicately for a while… but it looks like that isn’t going to happen.

Now I have always been a FUBU lesbian, (no not this FUBU) by which I mean I have always tried to support LGBT endeavors when it came to the arts/film. I was always championing “our voice” and applauding “our choices of expression”… but umm er uh I might have to let that thought process go.
It really only hit me this weekend when I watched a highly anticipated movie by one of my favorite creative black directors and found myself feeling some kind of way. This director in particular has helped create some of my favorite recent LGBT (and non-LGBT) cinematic experiences. Let’s just say I was pumped to see it… and then I saw it.
I am not writing a film review of this film, which is why I have consciously left the name of it

and the director out but I will say I am sick of lame lesbian sidekicks, aloof and emotionally retarded young gay black men, and sex scenes for lack of a better plot twist.
Don’t get me wrong, I am sure there are a bevy of talented black LGBT filmmakers that are trying to get their work out. This is not an indictment of the current black LGBT filmmakers either.Yes I know that Hollywood isn’t clamoring to make the next gay Waiting to Exhale or Soul Food… yes I get that. But it makes it harder for me as a consumer to want to take up the cause (by watching and buying) if what I get is regurgitated spittle that is only good for the FUBU audience and the straight community that doesn’t know enough to know that this is not necessarily a fair or balanced look at “the life”.
I am sure this is another one of those posts that won’t win me lesbian of the year BUT am I being a better “team player” by just accepting everything that comes my way with a rainbow label, or thinking so much of “my people” that I refuse to accept mediocre attempts? 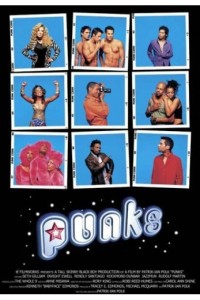 I want to see more films like the Watermelon Woman directed and starring Cheryl Dunye. As the first fictional feature film starring and featuring a black lesbian, it should be a definite must see for the FUBU and critical thinking crowds alike. How about a fresh and interesting look into the black LGBT community (even if it was slightly contrived) like Punks directed by Patriak Ian Polk.
It is time we make room for the webseries directors, are they new voices? (Confession: I have seen 33 seconds of Lovers and Friends and still haven’t caught that new one… that I can’t remember the name of either).
What do you guys think? Do you have any films that you can suggest? Tweet me @kristiweb
*Sidenote: I still hate Elena Undone more than any other LGBT movie ever*
From the twitterverse: