As a Florida born and bred lezzie, I have been asked by quite a few folks, “What is really going on with the gay marriage ban in Florida?” Normally, I would tell them to google it.  This time I was actually at a cocktail event with some of the Miami LGBT elite on the 17th (I snuck in) and got the tea from the folks’ holding the bag.

Here’s what we know:

2008 – 62% of voters voted for a state amendment defining marriage as a union solely between one man and one woman, making gay marriage illegal.

They can do that? Yep… pretty much. U.S. Supreme Court ruled back in the 70s that the definition of marriage belongs exclusively to the state and is exempt from federal scrutiny. So that was that, until…

July 17, 2014 – Circuit Judge Luis M. Garcia overturned the state’s constitutional ban on same-sex marriage after a legal challenge by six gay couples said it effectively made them second-class citizens. He ruled that gay marriage licenses could be issued as early as July 22, 2014 in Monroe County.

He can do that? Yep… pretty much.  Judge Gerald Cope did something similar back in ’08 lifting a ban on lgbt folks adopting children. The only difference in that case is DCF didn’t appeal. But…

A few hours later on July 17, 2014 – State Attorney General Pam Bondi filed a notice of appeal against the judgement, asking Garcia to change his decision.

Her notice of appeal creates an automatic stay that prevents any same-sex marriage licenses from being issued.  Was the ban lift dead in the water? Not really because…

July 21, 2014 – An emergency motion was filed by the attorney of the plaintiffs challenging Florida’s same-sex marriage ban.

Don’t get the party hats out to soon.

A few hours later on July 21, 2014 – Garcia upheld the stay on Monday afternoon until appeals are concluded.

That wasn’t really a surprise. Gay marriage is on hold in both Utah and Oklahoma while appeals there are being resolved.

So… yeah that is where we are. I will update when I can… but *shrugs* 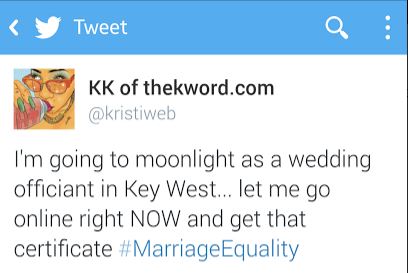 Kristi K is the K of the KWord. She is a part-time blogger and full-time lezzie. Born, bred and cultivated in Dade county, this Florida girl you can usually find Kristi stirring up trouble on Twitter at @kristiweb.

2 thoughts on “In The News: Gay Marriage Ban in Florida Still in Effect”