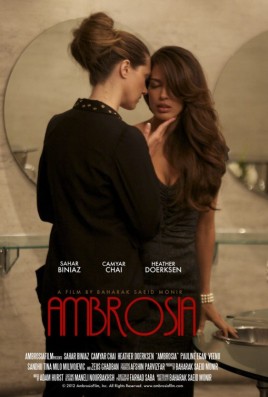 Okay so maybe this isn’t the super gay movie of the week… or the month… or maybe even the year but this is indeed the first Super Gay Movie in a very long damn time.

Now before I go into the actual review I blame myself and Netflix for watching this movie.

See what had happened was I was working on my journals last night and I needed some distraction. So I said “Hey let me watch a lezzie movie on Netflix.” I searched lesbian movie and for some reason this was the only one that came up. There was a hot ethnic (yes I said ethnic) woman on the poster… so I was sold.

Yeah… I know that’s what I get.

Plot Snapshot: Fashion professional is being hit on by her lesbian boss… will go for the gay or stay with her man?

Now when I started watching the movie I was like… Oh Lord another one of those let me leave my long-suffering but lame husband for this exciting lesbian sexpot story lines. I had braced myself for the  Elena Undone of it all but then… it wasn’t even that.

All I do know was that it was anti-climatic, anti-thematic, and pretty much anti-watchable. The story line was lacking. The acting was cliche and unbelievable. It’s one of those movies that hoped it could get by because of its pretty face… nope.

It wasn’t a story of about discovery of a new love or a rediscovery of an old love. It was about a predatory lesbian who should have been in someone’s sexual harassment super class. A wife who you didn’t know whether you wanted to hug or slap. And a husband that was losing even when he was winning.

Ok… my mama said if you don’t have anything nice to say shut up… so yeah. That’s all I got.

Sidenote: If any of our readers are either LGBT movie watchers or book readers that want to contribute reviews, please let me know at kristi [at] thekword [dot] com.

3 thoughts on “Super Gay Movie Review of the Week: Ambrosia”