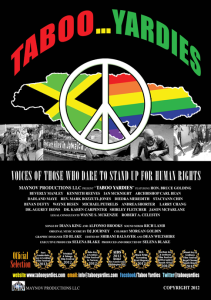 The film examines the socioeconomic and sociopolitical environment of Jamaica that allows for violence against lesbian, gay, bisexual and transgender individuals. Filmmaker, Selena Blake, who has been on tour throughout the United States with her film will be answering questions following the screening. Angeline Jackson, the Executive Director of QCJ, will also be in attendance.

Jackson has been sharing her inspiring story of surviving “corrective rape” and becoming an activist fighting for justice for LGBT women in Jamaica. She was acknowledged by President Obama during his visit to Jamaica earlier this year. Speaking of Jackson, President Obama said:  “As a woman and as a lesbian, justice and society weren’t always on her side…but instead of remaining silent she chose to speak out and started her own organization to advocate for women like her, get them treatment and get them justice and push back against stereotypes and give them some sense of their own power. And she became a global activist.”

Get your tickets on eventbrite.