So as many of you know Jai and I are in a long distance relationship (for now). We do everything we can to keep it together from love letters to long trips. We have gotten very creative over the last year and a half.

One of my favorite things we do is Facetime date night.

We have watched everything from Power when it is on (I am team Tasha), the Wire (it is definitely worth a rewatch), and a zillion movies. I love doing my face and getting all glam.  The smile I get when she answers and sees me for the first time makes me feel warm and happy. I swear every time it is like the first time.

So last night, it was my time to pick the movie of the week.

I selected an oldie but a goodie, Glenn Close’s tour de force portrayal of Alex Foster in Fatal Attraction. 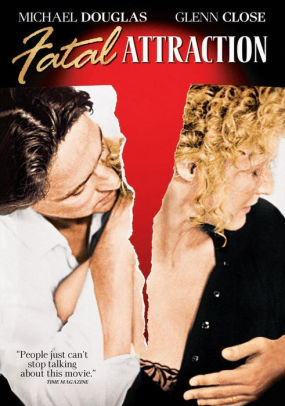 Just in case you have been living under a rock, here is the plot snapshot.

A seemingly happily married man, with a wife and lovely daughter, meets a mysterious blond at a company party — WHERE HIS WIFE WAS 10 FEET AWAY. While his family was out of town, he has a late lunch with Ms. Blond. Well one thing leads to another which leads to 48 hours of “fuck my family” sex. The weekend draws to a close with him basically giving her the deuces to go back to his happy home.

And that’s where the crazy come in…

She tries to make herself seem sweet and nice — Nope,  staying with the wife.

She slits her damn wrists — Nope,  staying with the wife.

She starts calling all time of night — Nope,  staying with the wife.

She tells him she is pregnant — Nope,  staying with the wife.

She starts escalating her actions, now including his family in her chaos. [3] Things get worse and worse until the climax where someone dies… spoiler alert It was the crazy ass blond who for some reason can hold her breath under water for a whole minute.

While we were watching the movie we had such an interesting conversation about marriage, fidelity and infidelity. [4] We learned so much about each other during that 119 minutes of crazy. This movie takes for better or for worse to a whole new level.

Was the husband wrong for stepping out on a seemingly happy relationship? Should the wife been as invested in keeping the passion alive as much as she was keeping her family happy in a new country home? Should she take him back? Will this make them stronger? Will he ever cheat again?

[2] If you know me I don’t like to swear, but that damn movie had all kinds of caught up.

[3] This is where Jai says she would have gotten her tail beat up. I agreed once the daughter was involved.

[4] Much more than the movie itself did, which annoyed me. Yeah yeah yeah, she kicked him out of the house after that broad came to her house. But before they could have a heart to heart, or even see some groveling on the husband’s part, there were kidnappings and car crashes. Meh.